This is a milestone for ADE since their founding in September 2020 to consolidate AirAsia Group’s engineering and MRO assets to provide a centralised support service for all commercial airlines in the region. They have future plans to establish a one-stop shop for airlines that want to operate a fully connected fleet using their end-to-end engineering and maintenance, repair and overhaul (MRO) expertise and Inmarsat’s market-leading connectivity solutions with the goal of becoming the preferred GX Aviation installation partner in Southeast Asia. ADE has already obtained base maintenance approvals from the Civil Aviation Authority of Malaysia (CAAM) and Indonesia’s Directorate General of Civil Aviation, with approval from five additional authorities expected before the end of 2021.

Chris Rogerson, Vice President of Global Sales of Inmarsat Aviation, stated that their partnership with AirAsia Group, their largest customer, was successful because of their shared passion for the opportunities of digitalisation and connectivity, and looked forward to collaborating further on GX Aviation installations with ADE.

Mahesh Kumar, CEO of Asia Digital Engineering, shared the positive opinion about the new partnership and looked forward to future expansion of both GX Aviation installations and ADE’s growth as a market-leader.

airasia Super App Expands Offerings To Over 700 Airlines And 3,000 Destinations

Kuala Lumpur, 28th October 2021 – The airasia Super App has expanded its flight and hotel offerings, partnering with over 700 international airline brands flying to over 3,000 destinations, with over 300,000 hotels available on the app.

This reflects the super app’s growth from an online travel agent (OTA), as it has obtained partnerships with prominent airline brands (including Air Canada, Air France, Qatar Airways, and many more) and hotels. Users can now travel to several destinations within the AirAsia network with great value, including across Europe, Oceania, Africa, the Middle East and the Americas. 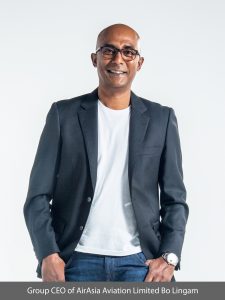 Bo Lingam, AirAsia Aviation Limited Group CEO, stated that the structural change will facilitate growth in all businesses in the portfolio and pave the way for future developments and airline ventures as they review new market opportunities. This will allow AirAsia to continue being the world’s best low-cost airline while reviewing and expanding their operations and offerings in airlines and beyond with stringent health, safety, and hygiene measures, especially as borders and businesses reopen with the gradual resumption of air travel.

Riad Asmat, AirAsia Malaysia CEO, looked forward to working closely with the government, Langkawi Development Authority (LADA), and Tourism Malaysia to support the revival of the tourism sector, and announced plans for future Langkawi tourism campaigns and deals which can be found on the airasia Super App.

He gave assurance that AirAsia is committed to delivering safe flights and adhered to stringent health and hygiene protocols, including on-ground at terminal, ramp and cargo areas as well as on board fights. This is further supported by technological innovations and improvements, such as built-in aircraft features such as the cabin air filtration system and the vertical downward air circulation inside the cabin to minimise the risk of inflight infection.

BigPay Raises US$100 Million To Be Leading Southeast Asia Bank

Singapore/Kuala Lumpur, 6th August 2021 – BigPay, an airasia Digital portfolio company and a leading fintech in Southeast Asia, announced today that it has finalised up to US$100 million in financing from South Korean conglomerate, SK Group.

Founded in 2017, BigPay is present in both Malaysia and Singapore. Its current offering includes a prepaid debit card which can be used to spend anywhere Visa or Mastercard is accepted, local and international money transfers, micro-insurance, bill payments and a budgeting tool. BigPay has launched a series of products for its users focused on long-term financial health and accessibility.

Kuala Lumpur, 7th July 2021 – airasia Digital, the digital arm of airasia Group entered a partnership with Gojek, Southeast Asia’s leading mobile on-demand services and payments platform, to acquire Gojek’s operations in Thailand. This will allow both Gojek and airasia to explore new opportunities and collaborations in the fast-growing region.The Gojek app will continue operating through to 31 July 2021 to ensure stability for their drivers and merchants, following which they will be invited to onboard the airasia Super App. In return, Gojek will receive shareholding in the airasia Super App, whose market value is USD1 billion. airasia will cooperate with the existing Gojek team in Thailand to ensure a smooth transition to understand the needs of the local Thai market and users.This will accelerate the airasia Super App’s expansion in Asean and new markets like Chiang Mai and Phuket by continuing to leverage the existing ecosystem services for riders, merchants and customers while adding new offerings such as groceries and beauty items. Meanwhile, Gojek will increase investments in Vietnam and Singapore operations through increased driver and merchant acquisition initiatives, enhancements to the user experience, and merchant acquisition initiatives.Tony Fernandes, CEO of airasia Group, expressed excitement over the long-term strategic partnership with Gojek which will boost the airasia super app in the region.Kevin Aluwi, CEO of Gojek, voiced pride in the achievements of Gojek Thailand and gratitude to their customers and partners, and expressed confidence that the partnership will bring greater value to users while allowing them to invest strategically in new markets.Aireen Omar, President of airasia Digital, said the collaboration represented the success of airasia’s digital transformation. Meanwhile, Tassapon Bijleveld, Executive Director of Asia Aviation, on behalf of the group’s major investor, said the new partnership will support Gojek employees, drivers and merchants, local SMEs and fresh food suppliers, and delivery drivers with the new markets airasia will launch by leveraging on what Gojek has achieved.

Kuala Lumpur, 29th June 2021 – AirAsia Group airlines have made cargo spaces on their flights available on Freightchain, the world’s first digital air cargo network based on blockchain, through adoption by Teleport, AirAsia’s logistics venture which manages their cargo services.

Freightchain uses an online booking process and digitally creates a combined itinerary to transport cargo across multiple routes, destinations and airlines. It runs on blockchain, allowing airlines to manage shipment bookings on their own.

This will provide AirAsia and other airlines a platform to increase their cargo capacity utilisation by fully interlining flights digitally with other airlines, allowing for faster and more on-demand connectivity to transport cargo across Southeast Asia and beyond. Cargo-related businesses such as exporters, importers and freight forwarders will benefit from the simplified process, improved efficiency, and huge cost savings.

Tony Fernandes, Chief Executive Officer of AirAsia Group, explained that the listing of all of AirAsia’s airlines on Freightchain supports their goals of improving their regional reputation as a digital cargo distributor and serving customers in regions outside their network such as Moscow and Brussels. He commented on the new opportunities and connections opened by Freightchain for airlines and shippers, and welcomed other airlines to join the global cargo network.

Kuala Lumpur, 9th June 2021 –Teleport, the logistics venture of airasia digital, has strengthened its position as a key air logistics player in Asia with its very first dedicated 737-800F freighter and two AirAsia A320 passenger aircrafts converted for increased capacity. The two planes were converted in Malaysia by Asia Digital Engineering (ADE), the wholly owned subsidiary of AirAsia Group Berhad, and by Thai AirAsia in Thailand.

This follows up on Teleport’s efforts to develop their cargo-only network in the region, with AirAsia operating six A330 and two A320 on Teleport’s behalf in May. The leasing of the new aircraft will solidify Teleport’s coverage across Asia with more reliable delivery.

The freighter will begin operations across Asia beginning in Q3 2021, operating out of the Teleport hub in Bangkok to strengthen the route network between China, India and Southeast Asia and offer improved connectivity to and from Teleport’s long-haul markets.

Meanwhile, the two planes will be based in Malaysia and Thailand continue their schedule from Bangkok and Kuala Lumpur to key cities such as Hanoi, Ho Chi Minh City, Hong Kong, Jakarta and Yangon.

Adrian Loretz, Chief Operating Officer of Teleport, voiced his excitement over this expansion which strengthens their key routes in Asia as part of their strategy to build the capacity and connectivity to offer 24-hour door-to-door delivery across all of Southeast Asia. He commented on the decision to use the new planes to tackle the surge in demand for e-commerce and other cargo with increased cargo capacity, and further plans to bring in more freighters and converted planes.